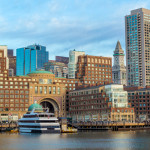 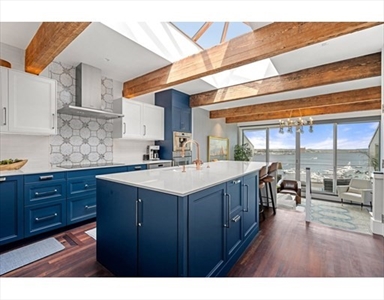 Extraordinary penthouse residence with stunning unobstructed city and water views will leave you speechless. The home is located at a prime waterfront location featuring top of the line renovation, including Thermador appliances, custom Devine cabinets & oversized island with quartz counters.The expansive open living spaces is located in a separate sunken area with 11 ft ceilings and wonderful natural light.Floor to ceiling windows and custom glass doors open to the sprawling private deck with views of Boston Harbor. Spanning the full length of the top floor, the residence boasts hardwood floors, designer details and custom storage throughout. The bedrooms are located in the back of the home with stunning views of the North End and downtown Boston.The main bedroom offers outstanding wardrobe storage and a custom bath. Central heat & air, washer & dryer and 1 garage parking space complete this one-of-a-kind home. This professionally managed building has an elevator & it is pet friendly. 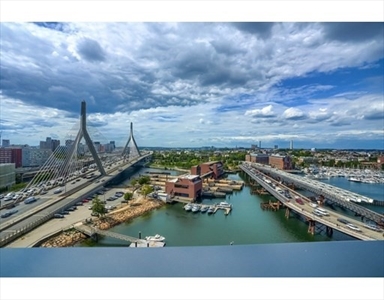 Ensconced in one of Boston’s most vibrant and modern communities, this luxury 2 bedroom, 2-bath condo offers a relaxing lifestyle with the best shopping, entertainment, and outdoor living. Only steps from TD Garden’s music and sports, spoilt for choice with gourmet restaurants, fresh farmer and fish markets, active nightlife, and Harbor walk, all while being right on the water! This space further impresses with wide plank oak floors, sun-drenched rooms with windows offering stunning water views of Boston, two spacious and airy bedrooms, and two gorgeous fully updated bathrooms with clean modern lines beautifully highlighted by marble. Modern clean lines continue into the kitchen with quartz countertops and high-end stainless steel appliances. Thoughtful amenities include available valet parking, a fitness center and common area (that is located on the same floor as this unit), the breathtaking rooftop terrace with grilling areas, and a dedicated social coordinator from Luxury Attaché. 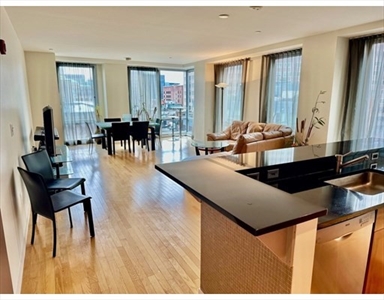 Opportunity to live in the vibrant Financial District close to the Greenway! This beautiful southeast facing corner unit at FOLIO boasts a stylish, open floor plan with great light and huge floor-to-ceiling windows. The chef's kitchen features cherry cabinetry, top of the line stainless, black granite, and a huge breakfast bar. Both bedrooms have en-suite baths and are of generous size. His and hers Closets in the master bedroom. Gleaming hardwood floors throughout. W/D in the unit. 24 Hour concierge. Parking available for rent or purchase. This home has been beautifully maintained and is in move-in condition. Conveniently located, all of the restaurants and services of the Financial District, the Waterfront and the North End are close by. 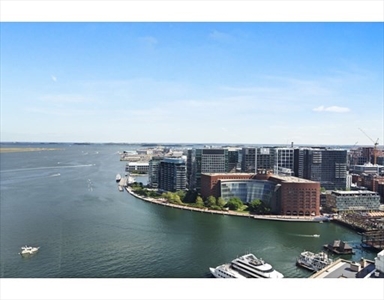 Welcome to Boston's beautiful Waterfront neighborhood. This beautifully renovated corner unit offers an open layout with 2 large bedrooms. The views on the 32nd floor overlook the harbor and city, best of both worlds! The open kitchen offers granite countertops, Bosch and Thermador S.S. appliances and a dining room with the balcony overlooking the lively city. The abundance of natural light fills the rooms and spacious closets found throughout the condo. Building services include 24-hour concierge, laundry room, communal garden, and a seasonal pool with outdoor grilling areas. Garage parking available next door for rent. Harbor Towers is centrally located with easy access to the Financial District, Seaport, North End, restaurants, shopping, parks, and more! 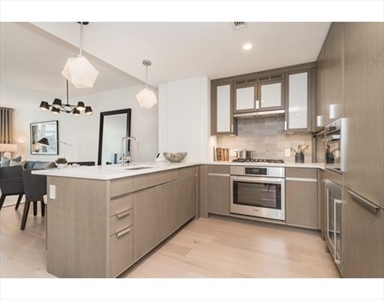 The ONLY waterfacing unit on the market at the Lovejoy Wharf! From the designer kitchen, to the exceptionally well laid out floor plan, this oversized 1bed/1bath condo is ideal for the urban experience. Enjoy oversized windows, oak flooring throughout, a full Bosch appliance package with gas cooking, a wine refrigerator, and in unit W/D. Amenities include a health and wellness space, manicured rooftop terrace with grills, bike storage, a clubroom, a kids playroom, a pet spa, and conference rooms/space. Residents are greeted by a 24 hour concierge and doorman. Lovejoy Wharf has welcomed Alcove -- an onsite restaurant by Tom Schlesinger-Guidelli, Nightshift Brewery, Rowhouse, and the Converse Flagship store. Lovejoy Wharf is conveniently located next to Hub on Causeway, anchored by a 65,000 sq ft grocery store, TD Garden cocktail bars and restaurants. Easy access to transit, MGH, the Boston Public Market, North Station, North End, Haymarket, Faneuil Hall, Downtown, Water Taxi Service. 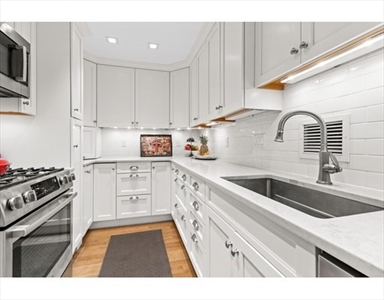 Luxury condo at Harbor Towers I on the Boston Waterfront with upscale finishes. Fully renovated and high-end features: Subzero 36 french door fridge, Brookhaven by Woodmode cabinets throughout, lazy susan pantries, pull outs, appliance garage, custom built-ins and book shelves, massive walk in closet in master, in unit washer-dryer, remote control electric window shades, Rohl and Newport Brass fixtures, quarter sawn oak floors, and much more. Second bedroom (with an additional closet) can also be used as home office and has balcony that overlooks the Aquarium! Full service concierge building with on site management and swimming pool with water view and grilling area for use during the summer. Next door garage parking in the Harbor Garage and Boston Harbor Hotel. Pets allowed. 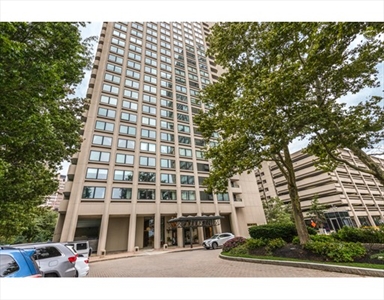 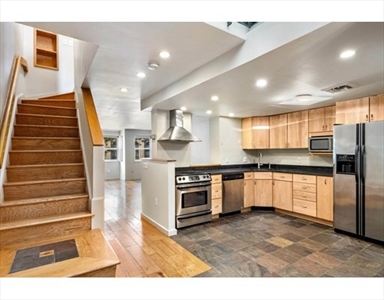 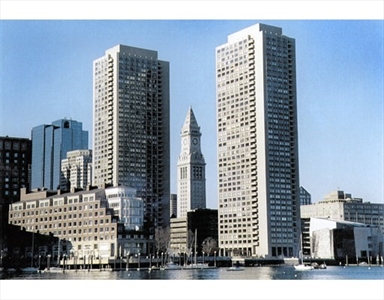 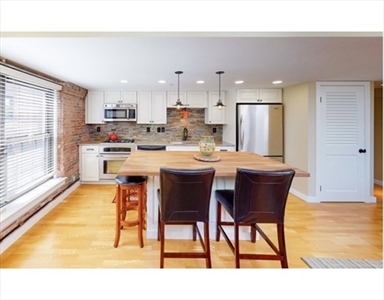 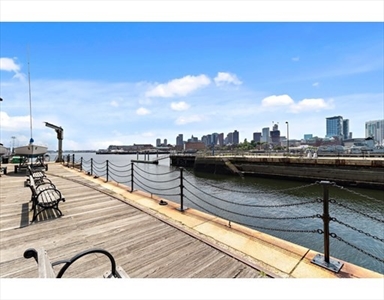 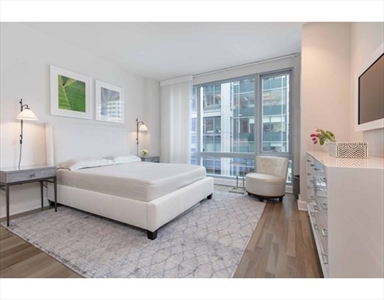 Newly renovated light and airy studio condo with a beautifully appointed kitchenette and bathroom. Located at the Intercontinental Hotel Residences, residents have access to the award-winning hotel amenities and multiple acclaimed restaurants and services including valet parking in a heated garage and 24/7 concierge. The home’s central location on Boston’s Waterfront offers a maritime atmosphere with all the cosmopolitan luxuries of Downtown and Seaport. Entering the home, you’re immediately bathed in soft, natural light from large floor-to-ceiling windows. The kitchen has been updated with bright white Poggenpohl cabinets, quartz countertops, and Gaggenau / Sub-Zero appliances. The space evokes a luxury hotel room with a kitchen and ample closets. The Intercontinental is centrally located 2 blocks from South Station, 1/2 block from Seaport and directly on Fort Point Channel and the Rose Kennedy Greenway. 1 direct access valet garage parking available for purchase for additional 100k.