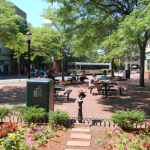 Just two miles north of Boston and abutting Cambridge to the east is Somerville, Massachusetts. While only 4 square miles in area, there are more than 82,000 residents who call the city home; making
Somerville the most densely populated city in New England.

Somerville is a traditionally immigrant enclave. Italians and Portuguese were the first to settle here, but today there are more than 50 languages spoken in the Somerville public schools. Somerville long served as a bedroom community for those commuting to downtown Boston, Cambridge or the Interstate 95-beltway, but has experienced a rapid influx of its own commercial development in recent years. In addition to the bustling Davis Square area on the western side of the city, Assembly Row has added an abundance of new restaurants, shopping and offices on the eastern side of the city. Much of Assembly Row’s growth is fueled by the addition of a new MBTA Orange Line station in 2014, representing the first new MBTA rail station in nearly three decades. Union Square is also undergoing a massive transformation, with new projects popping up left and right in anticipation for a new MBTA Green Line station in 2021. Enjoy a diverse collection of small businesses, restaurants, shops, and green space.

Somerville offers the perfect blend for those seeking a funky city with distinct neighborhoods and squares. The area is well suited for families, young professionals and college students given its proximity to downtown, its variety of activities and nightlife, and for its many art galleries and festivals. Indeed, Somerville is home to more artists per capita than anywhere else in the U.S. outside of Manhattan, and events sponsored by the Somerville Arts Council, like PorchFest and Honk!, have drawn international attention. It’s easy to see why Boston has deservedly earned the reputation as “Boston’s Brooklyn.”