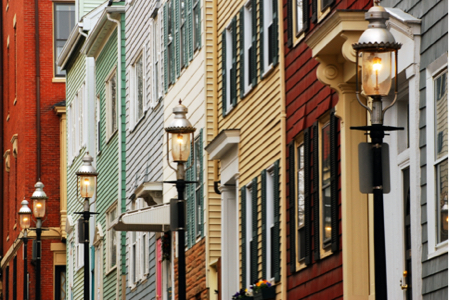 As one of Boston’s oldest neighborhoods, it’s perhaps no surprise that Charlestown is best known for its historical significance: it is the home of the U.S.S. Constitution, the Charlestown Navy Yard, the Bunker Hill Monument and it is where Paul Revere made his famous midnight ride.

Charlestown is also revered (no pun intended!) for its prime waterfront access. The neighborhood is situated on a peninsula just north of downtown Boston, and is flanked by the banks of the Boston Harbor and the Mystic River. Two marinas – Constitution Marina and Shipyard Quarters Marina – have experienced significant private investment over the past decade and have since transformed the waterfront into a bustling area for people of all ages.

Today, high-end luxury condos are scattered amongst brick and wooden brownstones, creating a truly eclectic residential neighborhood where architecture preserves the old while embracing the new. Once a traditional Irish enclave, Charlestown is now a haven for young professionals and families who long for a close-knit community but who want immediate access (by foot, bike, car, public transit, and even water taxi!) to Boston’s North End and Financial District.

Contemporary retail and restaurants have breathed new life into Charlestown’s gas-lit streets. But once again, old and new blend together effortlessly, with Charlestown’s newcomers coexisting alongside well-known establishments like Warren Tavern, the oldest tavern in Massachusetts. New parks, piers and green spaces have only added to this amenity-laden neighborhood. Combined with its stunning views of Boston’s skyline, Charlestown offers a perfect balance for the person who wants it all. 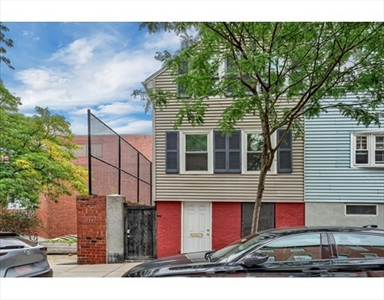 Don't miss out on this enchanting center entrance antique circa 1870 Single Family residence situated on a desirable tree lined side street! Just minutes away from all that Charlestown has to offer! This home awaits a new owner with vision and creativity to optimize its graceful floor plan! Large Eat-in kitchen with sliders with direct access to a private courtyard and open to a formal dining room with period fireplace mantel! Perfect living room with another classic fireplace mantel! Hardwood and random width pumpkin pine floors abound throughout the house! 2 good sized bedrooms and a full bathroom are located on the top floor! Windows and natural light from all 3 sides! Substantial full height walkout basement with laundry. So many opportunities to personalize this charming single family into your own irresistible home! 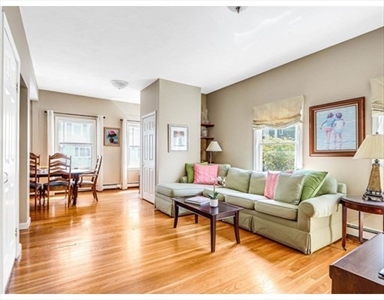 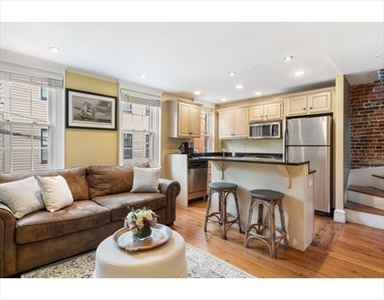 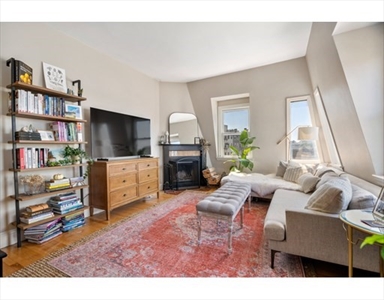 Stunning Penthouse condo that is conveniently located in the heart of Charlestown! This well proportioned two bedroom condo has an elevated feel with windows on all 4 sides with soaring ceilings and expansive southwest facings views that allows in light throughout the entirety of the day. This unit offers an open living area and kitchen space with new shaker style cabinets, gas range, stainless steel appliances and hardwood floors throughout. Both bedrooms feature ample closet space and plenty of room for a king or queen size bed and additional furniture. In addition there is a private storage space in the basement. The building is pet friendly and offers a common roof deck with unobstructed views of the Bunker Hill Monument and the Boston Skyline. Just minutes from the USS Constitution, Boston National Historic Park, Harbor Shuttle service and all the Charlestown Navy Yard has to offer, don't miss the opportunity to make this rare find your next home.

Back on Market due to buyer financing falling through. Top floor corner unit with open floor plan and lots of light! This 3rd floor walk-up unit is a fantastic 2-bedroom, 1.5 bath featuring hardwood floors throughout! Dining and living area offer lots of space to entertain or work from home! This pet friendly building has convenient in-unit laundry and two nice sized bedrooms with large closets! Efficient radiant heat, common outdoor patio space and a large garage parking space with room for storage. Why rent when you can own in Charlestown! Close to downtown shops & restaurants, Community College T Stop, highway access, Assembly Row and the Historic North End. Taxes do not reflect residential exemption. 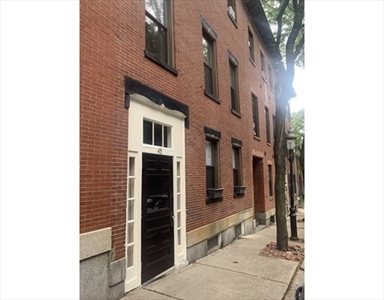 Location! Location! Location! Welcome to this spacious 1+ bedroom w/eat in kitchen in a gorgeous Victorian brick building on a gas-lit street. Light and Airy is the feeling you'll get when you walk into this unit with soaring ceiling heights & natural light flooding the unit from its multitude of windows. Feel like you are in the country as you gaze out at the trees while sipping coffee by the large kitchen window, enjoy the city street view while reading in the spacious master bedroom, or work from home in the study. The Unit boasts Closets by Designs custom built-in cabinetry, Built-in closets, a marble mantled decorative fireplace, Central A/C, and custom window shutters. Walk to all that Charlestown offers incl. the Tradesman-best pizza! and coffee! Mr. Q's, Wholefoods, City park, Waterfront, Community Park, Working Theatre. Easy access to the bus and T, Routes 93, & Rt 1. Plus, Low condo fees, and a Pet-Friendly Association! 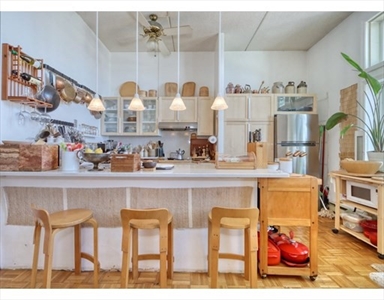 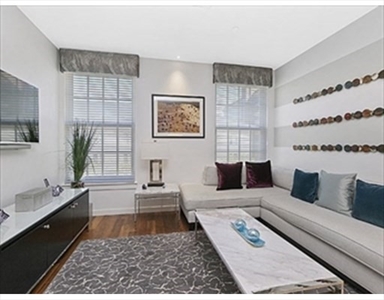 This stunning designer 1 bedroom PLUS office penthouse in the Charlestown Navy Yard features an open floor plan with 9' ceilings, a large living room and separate dining area- with gleaming walnut hardwood floors throughout and lots of light! The kitchen features a custom Boston Design Center tiled backsplash and wall and has stainless appliances, granite countertops and good cabinetry space. There is a large master bedroom and a bonus space perfect for a desk and a pullout sofa. Gorgeous bath with linen tiled flooring and granite vanity and wall decor. There is laundry in the unit; great custom fitted closets throughout. Enjoy the waterfront park nearby!! Rental parking available. Unlike any other unit in the building! Convenient to the water shuttle, taxi and MGH bus which takes you into Boston in minutes. 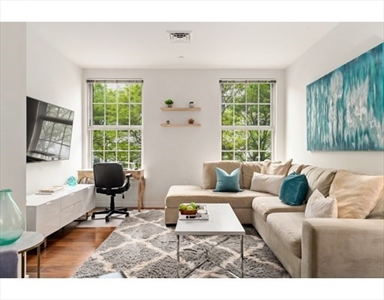 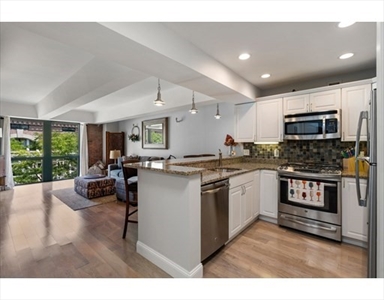 Welcome to Parris Landing in Charlestown's historic Navy Yard! Enjoy scenic waterfront living at this modern luxury building, featuring common areas designed by international designer Philippe Starck, a pool, gym, and 24 hour concierge services. Residence 4403 is a modern 1 bedroom, 1 bath, featuring an open concept floor plan, over sized floor to ceiling windows, and an abundance of natural light throughout. Enjoy scenic views from this home, which look out into the common court yard, with landscaped trees and beautiful architectural elements. Inside the home, the renovated kitchen was expanded, featuring a large island, modern white cabinetry, and stainless steel appliances. The bedroom is spacious, with enough room for a king size bed, and plenty of closet space. The spacious modern bath has recently been upgraded. The unit also features beautiful details throughout, with exposed brick and concrete, and custom built-ins. 1 deeded self park garage space included!

Listed by Joseph Barka of Compass 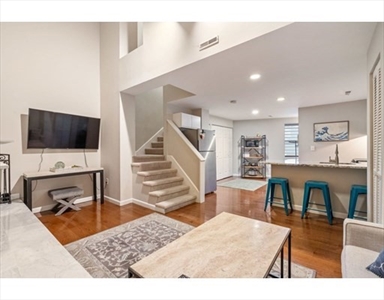 This urban condo offers a duplex design with high ceilings and is located in a professionally managed building. The open living space features a well-appointed kitchen with white cabinetry, stainless appliances, granite countertops, subway tile backsplash, peninsula with bar seating and a living/ space with fireplace & bookcase surround. A half bath is conveniently placed off the entry. The upper level offers a large bedroom that can accomodate a queen or king bed. A spacious, separate loft with closet and door is perfect for guest space, home office or sleeping area. The clean and well appointed full bath offers subway tile surround & porcelain tile floor. The unit has a fresh coat of paint, new carpet on stairs and ready to move in. Additional amenities include great storage throughout, hardwoods floors, in-unit W/D, and central air conditioning. Located convenient to local retail, restaurants, parks, public transit and just over a mile to popular dining & shopping at Assembly Row. 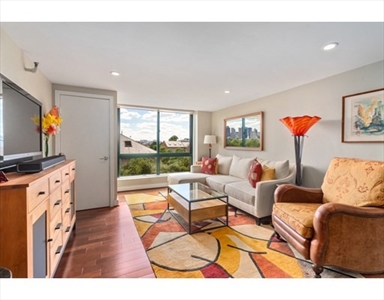