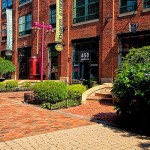 SoWa (a play on “South of Washington Street”) is a district located within the limits of Boston’s South End neighborhood, but is an area that has taken on an identity of its own in recent years, largely due to its abundance of art galleries, high-end restaurants, specialty shops and open air markets. SoWa can best be considered Boston’s version of New York City’s Chelsea. The area spans north-to-south from Herald Street to Massachusetts Avenue, and east-to-west from Albany Street to Shawmut Avenue, with 450-460 Harrison Avenue as its hub.

Originally a 19th century industrial district, SoWa was once home to manufacturers of pianos, canned goods and other merchandise. The area remained somewhat of a “no man’s land” until the late 1990s, early 2000s, when many of the large warehouses and brick and beam factories saw conversion to high-end lofts and artist live/work space. The neighborhood has particularly embraced artists through the SoWa Open Studios, SoWa Market and First Fridays, an event held the first Friday of each month in which the district’s more than 80 art galleries launch their new 30-day shows. Intentional programming and frequent festivals draw artists from across the U.S. who want to showcase their work in front of a crowd that comes from all over the Northeast to explore the range of artwork. Much like startup companies once clustered in Boston’s “Innovation District,” SoWa is an area where creative people congregate, inspire and thrive off the energy of their peers.