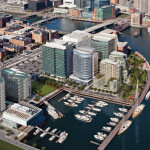 Located just to the east of the Fort Point Channel and fronting the Boston is the Seaport District. With the predominance of warehouses, shipping piers and railroad tracks, this neighborhood was once all but written off as a “no-man’s-land”—and certainly not a place you would want to live. Fast forward to today: the Seaport is one of Boston’s hottest real estate markets.

The foundation for the neighborhood’s renaissance began in 1956 when the Massachusetts Port Authority took control of the area. Drawn by inexpensive rent, open floorplans and spectacular harbor views, artists and startup companies slowly began filling abandoned warehouses. Former factories were converted in to loft housing and occasionally, new coffee shops would open. In the midst of the Great Recession, then-Mayor Thomas Menino rebranded the “Seaport District” the “Innovation District” as a means of drawing even more entrepreneurs, startups and techies—and it worked.

Private investment followed suit, almost faster than anyone could have expected. The Seaport’s high-rise residential, commercial and hotel properties are drastically transforming the city’s skyline. New luxury developments feature open layouts and spectacular views; redeveloped industrial buildings with exposed brick and wood beams highlight the Seaport’s industrial past. Corporate tenants like Vertex and State Street have recently moved in. Over 70,000 square feet of retail space are now filled by a wide variety of restaurants such as Legal Seafood, Temazcal Tequila Cantina, Jerry Remy’s Sports Bar & Grille, and Del Frisco’s. Within the next five years, the Seaport District will see over 3 million additional square feet of new construction and billions of dollars invested in to projects like Seaport Square.

While the Seaport is one of Boston’s “newest” neighborhoods, it does not fall short on art, culture and entertainment. The Institute of Contemporary Art (ICA), Boston Children’s Museum, HarborWalk, Blue Hills Pavilion, the Boston Convention & Exhibition Center, Harpoon Brewery and Lawn on D ensure that there’s always something fun to see and do. Concerts and festivals happen year round in this neighborhood, and with the South Station Transportation Center and the MBTA Silver Line providing access, this neighborhood has transformed into a vibrant destination for residents and visitors alike.