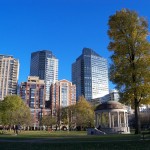 Midtown is a small portion of downtown Boston that is bordered by Tremont and Washington Streets and rests along the eastern side of Boston Common. Like the Financial District, most of Midtown was destroyed by the Great Boston Fire of 1872. When it was rebuilt, it was transformed into a bustling shopping district that drew people from throughout the region. Midtown’s central location made it a preeminent location for department stores, including Jordan Marsh and the flagship Filene’s Basement, which opened in the actual basement of the Filene’s department store.

Midtown is occasionally referred to as the “Ladder District” for its streets that resemble rungs of a ladder; but most know the neighborhood simply as “Downtown Crossing,” a simplification of the neighborhood but a reference to the pedestrian-friendly shopping district at its core. Significant private investment through Boston’s only “Business Improvement District” has drastically cleaned up the neighborhood in recent years. Street festivals and outdoor beer gardens draw young professionals to the area, many of whom work in the surrounding area. Midtown is a draw for those who love to be around the daily hustle and bustle and those who enjoy a variety of activities, as this area is home to Boston Common and the Public Gardens, a giant AMC Loews Movie Theater and Boston’s first Sports Club LA.

Those looking for ultra-luxurious living will also find a home in Midtown, as the neighborhood is being redefined by some of the most expensive residential units in Boston, including the Ritz Carlton Hotel & Residences and the new Millennium Tower, which when complete will be the largest residential high-rise in the city of Boston and will boast the highest level of modern amenities.