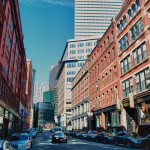 The Leather District is a nine-block area just east of Chinatown, an area once cut off from the rest of the city by the Central Artery. The neighborhood’s nickname stems from its history as hub for shoe and leather manufacturing. Located just on the fringe of Downtown Crossing, the Leather District’s 19th century brick warehouses held impressive window displays that attracted downtown shoppers. Many of the storefronts today still have period details such as sturdy cast iron columns, though the majority of industry has since relocated elsewhere.

Starting in the late 1980s, many of the warehouses were converted into chic residential and commercial lofts with exposed brick walls, sky-high ceilings, and unfinished wooden beams. The loft-style units have proven especially popular among young professionals and artists looking for live/work studios. Quaint shops, art galleries, small restaurants and an array of more traditional office tenants have moved into the Leather District, making this a vibrant neighborhood reminiscent of what you might find in an area like Lower Manhattan.

The Leather District benefits from its central location. The neighborhood is walking distance to downtown Boston, the Financial District and only a short distance to the major transportation hub of South Station. Interstates 90 and 93 are close by, providing access North and South of the city and to Logan Airport within just minutes. The Leather District is by far one of the city’s most distinct neighborhoods, and its popularity continues to grow given its proximity to the Rose Fitzgerald Kennedy Greenway, just one more amenity that adds to this neighborhood’s personality.