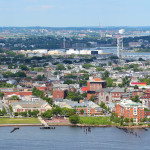 Located just northeast of downtown and across Boston Harbor, East Boston was originally built on five islands connected by landfill. East Boston is still an island today, so getting there requires going over a bridge or taking a tunnel. The Tobin Bridge, and the Callahan, Ted Williams and Sumner Tunnels all provide access, as do the MBTA Blue Line, Silver Line and ferries. Yet East Boston is perhaps best known as being home to Logan International Airport, a vital link in Boston’s transportation network and New England’s largest airport. With such incredible transportation alternatives, getting to East Boston has never been easier.

Given its water access, it’s perhaps no surprise that East Boston was once a mecca for shipbuilding. Many Italian Americans still live in East Boston, but have been joined by immigrants from Central and South America and Southeast Asia. This diversity is on full display in Maverick Square and Central Square, the main commercial areas where bodegas, salons, ethnic restaurants and frequent festivals offer something for everybody. Belle Isle Marsh Reservation, Constitution Beach and Piers Park add to the neighborhood’s appeal by providing green open space and recreational activities for residents alongside striking views of the Boston skyline.

Multi-family homes and row houses comprise the original East Boston housing stock, though the number of new condos and luxury buildings have grown, taking full advantage of the post-card worthy views. Jeffries Point and Eagle Hill are formerly gritty marina locations that have seen much of this new development, including Portside at East Pier and Clippership Wharf. While prices have risen four-fold in East Boston over the past two decades, the neighborhood remains relatively affordable, drawing many young professionals and families. More than 40,000 people live in East Boston today, a community that has successfully infused modern living into a neighborhood packed with Old World charm.